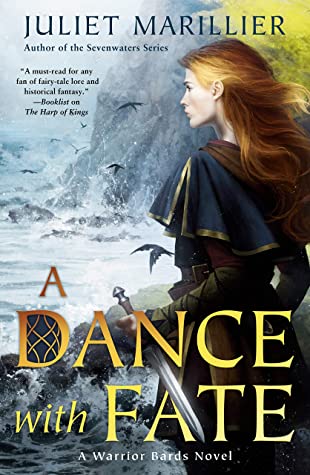 The young warrior and bard Liobhan has lost her brother to the Otherworld. Even more determined to gain a place as an elite fighter, she returns to Swan Island to continue her training. But Liobhan is devastated when her comrade Dau is injured and loses his sight in their final display bout. Blamed by Dau’s family for the accident, she agrees to go to Dau’s home as a bond servant for the span of one year.

There, she soon learns that Oakhill is a place of dark secrets. The vicious Crow Folk still threaten both worlds. And Dau, battling the demon of despair, is not an easy man to help.

When Liobhan and Dau start to expose the rot at the center of Oakhill, they place themselves in deadly danger. For their enemy wields great power and will stop at nothing to get his way. It will take all the skills of a Swan Island warrior and a touch of the uncanny to give them a hope of survival. . . .

THANKS MUCH TO THE PUBLISHER AND NETGALLEY FOR PROVIDING A COPY OF THIS FOR REVIEW PURPOSES, THIS DID NOT AFFECT THE CONTENT OF MY REVIEW IN ANY WAY.

Once again Juliet Marillier has taken me on an emotional journey with her masterful storytelling. I’m always happy to have my heart torn to shreds by Marillier, because I know that she’ll put it back together at the end of things. Even so, I wasn’t prepared for the immense heartache this story caused–I cried and I laughed and then I cried some more, and then I cried again even louder until those cries turned into full on sobbing. But it was all worth it! There was a gentle and kind healing on the other side of this torment. I cherished every minute spent reading this book, even when it was tearing out my heart–I think that’s just the magic of Marillier’s writing.

Alright, so now that I’m done confessing to you all the embarrassing details of the time I spent in tears while reading this one, let’s get to the good stuff. 😉   We still get POV chapters from the three main characters we met back in the first book–Liobhan, Dau, and Brocc. I’ll be honest, once again Brocc’s chapters didn’t interest me quite as much as Liobhan’s and Dau’s but I did form much more of a connection with him in this book than the previous volume. I felt like I got to know him and what’s important to him. Despite being a warrior, Brocc has a gentle and caring soul. He’s sometimes unsure about certain things but he always, always tries to do the right thing. I honestly felt for him in this book, because of the strained relationship between himself and his wife left him doubting his future at times. I felt like he was put in a tough position over and over and it made me a little mad on his behalf. Brocc was pretty awesome in this one and I’m now a fan.

Of course, my favorite characters of all are Liobhan and Dau. We already found out about some of Dau’s past and here we find out more as Dau is forced to face it when he’s given little choice but to return to his childhood home and remain under the ‘care’ of his abuser. Not only is Dau dealing with the loss of his sight but now he’s confronted with something he thought he’d put behind him. I felt so bad for Dau! But thank goodness for Liobhan. Knowing Dau’s past and being his friend she was not about to let him face things alone, especially when he was already at such a low point. Liobhan! I love her so much. She has a temper and isn’t conventional but she takes that fierceness and channels it into a plan to survive and help her friend survive as well. She doesn’t spend much time feeling sorry for herself or letting Dau feel sorry for himself–they have other things to worry about after all. But that doesn’t mean that she’s not empathetic either–she seems to know just what he can handle, when to push him and when to let him rest. With Dau, she’s always seeing the potential of the man he can be and encouraging that growth, like he’s a plant she’s carefully nurturing. She has many skills and she uses them all here–her knowledge of healing and herbs she learned from her mother, building and construction things she learned from her father, the training she learned from her time on Swan Island, etc. I loved seeing her put all these skills to work for her and Dau during this difficult situation. Of course the other thing Liobhan has is the ability to be genuine and get others to like her which also plays a big part in getting them through this ordeal. Dau goes through such a great story arc here. It was hard to watch him struggle (so many tears) but it was also rewarding to see him come out the other side of things with more confidence.

There were some other side characters which were great, some of which we’ve met before and many new ones. The main villain in this is a bit evil for the sake of being evil but if there’s anything my time spent binge watching true crime shows has taught me it’s that some people just are evil.

If I do have one quibble with this book it’s that it is somewhat ableist in some ways. SPOILER AHEAD FOR THE END OF THE BOOK….PLEASE SKIP THE NEXT PARAGRAPH IF YOU DON’T WANT TO BE SPOILED.

Dau loses his sight and I don’t think it’s wrong to depict his journey through that, including feeling that loss and what it means to him as a warrior and what he feels he won’t be able to do going forward. His thoughts of suicide seemed extreme from a modern perspective, and even throughout history there must have been blind people–maybe more dependent than the blind are today, but that did seem a bit extreme. But again, that was Dau’s feelings and that’s not really my main issue. My issue is the magical healing he receives at the end. Whhhhyyyy is there always some sort of magical healing? Dau was actually learning, somewhat, to cope with his blindness by the end. Even others remarked on how capable he was when fighting. I wish that instead of giving him back his sight magically (and that was a bit of a deus-ex-machina as well, let’s be honest) that he had just accepted that he was capable as a blind person. I think that would have made the story that much more powerful. But, instead, we get magical healing and honestly it felt like a bit of a cop out. (Wow, maybe this bothered me more than I thought it did…) Anyway. End rant.

Overall, even with that one thing that annoyed me, I really loved this book. There are very few authors that can make me empathize so much with their characters that I end up crying over their pain and having my heart warmed through their accomplishments. I will always and forever be a huge fan of Marillier and I recommend this series if you haven’t started it and definitely recommend continuing on with this volume if you have. 4.5/5 stars.

21 thoughts on “Book Review: A Dance with Fate by Juliet Marillier”