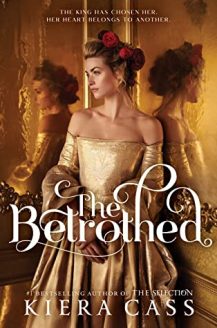 When King Jameson declares his love for Lady Hollis Brite, Hollis is shocked—and thrilled. After all, she’s grown up at Keresken Castle, vying for the king’s attention alongside other daughters of the nobility. Capturing his heart is a dream come true.

But Hollis soon realizes that falling in love with a king and being crowned queen may not be the happily ever after she thought it would be. And when she meets a commoner with the mysterious power to see right into her heart, she finds that the future she really wants is one that she never thought to imagine.

I read this book knowing that I personally would most likely find it stupid but at least it might be good entertainment so please take my thoughts on it here with a giant grain of salt. 😀

Once again, I can’t tell if Kiera Cass is an incredibly average writer who somehow lucked out getting published oooooorrr a total genius. Reading a Cass book always feels a little like I’m being punked. Like The Selection, The Betrothed is set from the POV of a vapid young woman vying for the hand of the head of state, in this case the king (of some country that I can’t remember the name of even while reading the book because, let’s face it, it doesn’t really matter anyway).

Because this is set from Lady Hollis’ POV we’re seeing this world through her eyes and what’s important to her. She’s an incredibly shallow girl and naive as well. She wants to marry the king not only because her family wants this alliance but also because she thinks the king is kind of dreamy and likes the idea of being a queen. Over the course of the book Hollis starts questioning herself, ‘is this really what I want?’. This is sparked by her interest in a visiting queen from another country who, it turns out, is extremely unhappy in her own political marriage. Next thing you know Hollis is talking about her gilded cage. Girl. You are not even technically betrothed yet and you were perfectly happy five minutes ago but now all of a sudden ‘gilded cage’ LOL OKAY. Of course, not that Hollis has some perspective (LOL) she starts noticing that her feelings might lie elsewhere. Oh and of course there’s some vague ‘politics’ happening but that’s never really fleshed out–world building seems to be a major weakness for Cass but I was at least expecting that.

The other characters in this book are all equally flat or insipid. No one has depth. There are attempts at this? They’re not successful imo. But again, I don’t know if this is because the writing is bad or because Hollis is so self centered that this is just how she views those around her. Hollis approaches every situation like a newborn–this is the first time ever becoming aware of such happenings. There’s also one part where she’s doing a favor for a courtier and she thinks she’s being so clever by manipulating the situation but it’s actually all rather straight forward and I was like ‘why did this guy even ask for her help she literally did nothing lololol’. And then she’s so self-satisfied about it. Oh, Hollis–you sweet summer child.

The entire book left me wondering ‘what is the plot? Is there even one? What is the point of this book?’ Even if you go with something vague like ‘self discovery’ there’s not much there. I guess what I’m saying is that this book lacks substance. Which is fine! Not every book needs that, some books are just for entertainment, and I wouldn’t have minded if that were the case here but this book wasn’t very entertaining either. It’s like it was trying to make points but those points were so muddled that they never came across in the end. I don’t think I’ve read a book that was so utterly pointless before. It’s not even slice of life because you can see the effort, that there are points trying to be made, but they’re just lost. Some of the things that happen in this book, some of the action the characters take, are baffling to me.

But here’s the thing–and this is where I can’t tell if Cass is a genius or not–by setting this book from Lady Hollis’ POV we’re seeing exactly how a person that vapid would view the world and others around her. Here’s a character that only cares about certain things and, even admits to herself, lacks intelligence. There’s a point at which Hollis is questioning herself and she realizes she’s nothing more than a pretty face (I may have felt just the tiniest bit sorry for her revelation there). But this so excellently(?) written POV is why the story itself feels so shallow. The question remains–is this deliberate? If  not, then the writing is bad. If it is a deliberate choice then kudos for accuracy but also, why? Because the story really doesn’t build to anything.

Anyway, I thought this would be a fun read, good to enjoy some popcorn to, but it wasn’t even that so I’m left in complete disappointment here. Womp womp. 2/5 stars.

17 thoughts on “Book Review: The Betrothed by Kiera Cass”