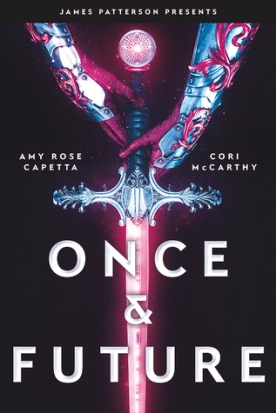 I’ve been chased my whole life. As a fugitive refugee in the territory controlled by the tyrannical Mercer corporation, I’ve always had to hide who I am. Until I found Excalibur.

My name is Ari Helix. I have a magic sword, a cranky wizard, and a revolution to start.

When Ari crash-lands on Old Earth and pulls a magic sword from its ancient resting place, she is revealed to be the newest reincarnation of King Arthur. Then she meets Merlin, who has aged backward over the centuries into a teenager, and together they must break the curse that keeps Arthur coming back. Their quest? Defeat the cruel, oppressive government and bring peace and equality to all humankind.

I really wanted to love this one, but in the end there were just a few too many things that didn’t quite work for me. Womp womp.

Let’s start with the positives. I’m always up for a good retelling. King Arthur in space? Heckin yeah. The concept is pretty cool. I enjoyed a lot of the space opera elements too. The ships, and the piloting of the ships, and the visiting different planets, and being on the run from a giant big bad empire type is all extremely fun stuff. Yay! I also loved that there is all sorts of LGBTQ+ rep in this book. If you’re looking for rep, it’s here, look no further.

Unfortunately, that’s about it. I feel like this book suffered from a few things. The writing was trying to do too much, trying to be too much, and the book being too short left me with a feeling of superficiality. Everything felt so surface level. The potential is there, but I feel like we didn’t get to dive deep enough into anything in order for the book to make me care about much. The characters had the most potential but I feel like they weren’t fleshed out enough. We’re told who they are but we don’t get to experience them as a reader, really feel like we’re in their shoes. Part of this, I think, is because of the way the reincarnation stuff is handled. Oh, well this is so and so, they fulfill this part in the story. I feel like they weren’t allowed to be their OWN characters, in a lot of ways. Things came close with Ari, and her somewhat fleshed out background. There was even some ‘oh, but you aren’t Arthur, you’re your own person’ but there was so much focused on her being Arthur the entire time that such a statement felt disingenuous at that point in the story.

The other thing is that the tone of the book was all over the place. There were some very serious things that the characters are dealing with, but the story kept switching from serious situation to sexy fun relationship stuff. And this criticism is from someone who LOVES relationship stuff! I love romances! But the relationships in here felt shallow too because everything felt shallow. I wish this book decided to stick to one tone. It’s space, it’s the future, it’s already nuts, just go for it and make everything crazy and a fun romp! And part of that was there. It started off that way! But then it’s just like a ping pong ball back and forth in tone and in the end left me feeling confused.

And maybe this is on me as a reader and my expectations–because I felt like the potential was there for it to be so much more and it just really didn’t live up to what I wanted it to be overall. This book wasn’t terrible, I still had a fairly okay time reading it, but I just wish it had been more. If it had been a little bit longer and we’d been able to spend some more time with the characters as themselves, and the tone had been a little more focused, this would have made me very happy. As it is, I was left wanting. 2.5/5 stars.

16 thoughts on “Book Review: Once & Future by Amy Rose Capetta and Cori McCarthy”