For a year, Violet’s life has been blissfully calm. In fact, life has actually been pretty great; A year of a fully effective restraining order against her abusive ex, and as a bonus, she just closed on her very own house. Nothing fancy, nothing big—but safe, and it came at a pretty great price. 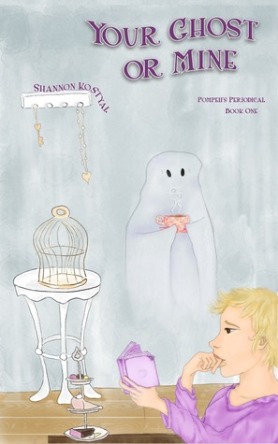 Her work is a little odd – but it had been for a few years. No one worked at Pompeii’s Periodical, the resident new age bookstore/cafe`, without expecting at least a little uniqueness in the environment. Violet didn’t actually believe in any of the things her store marketed to, or that the customers believed in, but she liked her coworkers, most of the customers were pretty cool, and she admired any environment that encouraged free thinking. One size didn’t fit all in clothing, so why would it on something so profound as philosophical and spiritual world views?

Sounded great. Heck, it even sounded like the happy ending wrap up to a story.
The year came and went, and the restraining order expired. Her ex showed up again, and if that wasn’t bad enough, it turned out Violet’s bargain price house wasn’t quite what she’d bargained for. One teeny tiny extra feature came with the purchase. Her very own theatrically dramatic ghost.

One stalking ex, one attention-starved dead actor, and one budding romance later, Violet’s kissed her peaceful, calm existence goodbye, and all she has to show for it is a deep uncertainty about all the things she thought she knew. Juggling these strange changes would be a lot less difficult if the resident ghost didn’t keep screwing with her tea stash.

I wasn’t sure what to expect with this book, but I was pleasantly surprised. Violet is our main character and I think it’s pretty easy to empathize with her through most of the book. She  likes her job even if she thinks the new age stuff is all a little kooky and she gets along with her coworkers for the most part. We learn that she’s recently gotten out of an abusive relationship and that has an effect on her relationships with others and her reactions to certain things throughout the story. Overall she’s just a good person who you want to root for.

Our ghost, Henry, on the other hand is not very likable in my opinion. It seems as if he’s supposed to be a bit of a trickster but instead he comes off as a bully at times and a bored ghost who likes to interfere in the lives of the living. He is pretty fun at times, but I don’t know if I would have become friends with him the way that Violet did. Still, he is an extremely bored ghost so I guess I cut him some slack here and there. And sometimes he actually meant well, but still ended up doing something wrong. But he did come through for Violet in the end and I guess that’s what matters at the end of the day. I don’t think Henry was bad, just bored, misguided, and a bit selfish at times. He really does have some good character growth throughout the story though, which is great. In fact, I think the author did a great job with the two main characters and their development throughout the story.

The side characters were all pretty interesting, although I sometimes questioned why Violet was best friends with Amy. Amy seemed like the type of overbearing personality that walks over others just because they’re a force of nature. But then again, Violet has proven time and again to not be the greatest judge of characters, so perhaps that’s come in to play here as well.

The story does take a little bit to get going, I think we spend just a little bit too much time with Violet in the shop and learning too many details there that are a bit irrelevant in the grand scheme of things, but once it does pick up things get interesting. Despite the slow start it’s still a quick read. Once Henry and Violet officially meet things really take off. Now Violet has to deal with some aspects of the supernatural being real, confronting her beliefs, and all of this while dealing with an abusive ex coming back into her life to cause her grief. Violet has a lot on her plate but she juggles it well. There was a good bit of drama and action at the end of the story too, which I really enjoyed. I’m all for a crazy villain because they can be really fun when revealed.

I have to say, I really enjoyed the romance in this one . It came on quickly but despite how fast things progressed, the amount of time that passed in the book, it felt like a bit of a slow build. It was also kind of unexpected for me. I thought things might go one way but they didn’t and then they ended up another way. I was really pleased with the direction things took in the end. It was a sweet romance. 🙂

Many thanks to the author for providing a review copy. This did not in any way affect my review of the book.

9 thoughts on “Book Review: Your Ghost or Mine by Shannon Kostyal”

Thanks much to the folks at 47North and Wunderkind PR for sending BACCHANAL by Veronica Henry my way! Much obliged. Really loving the cover and description for this one.
New arrival! Excited to dig into book 2 of this series (even though they changed the title of the first book for some reason, so odd!)
Valentine's day book haul. Looking forward to putting these in my TBR pile to read at some point in the future lol.
When you're trying to read and the cat wants to cuddle 😂😂 Let me get back to WINGS OF FURY, cat!
A new arrival! FIREHEART TIGER by Aliette de Bodard arrived this week. It is very small so hopefully I can squeeze it in to my reading sometime soon. Have any of you read this one yet? What did you think?
The final book in the Chimera trilogy by Cate Glass! Excited to add this to my TBR, I hope to be reading book 2 next month. Are there any series you're working on finishing up this year?