Full disclosure: I ended up with an ARC copy of this in my book pile back in September while attending the Baltimore Book Festival. Since the book is being released later this month I thought it was a good time to dive in. 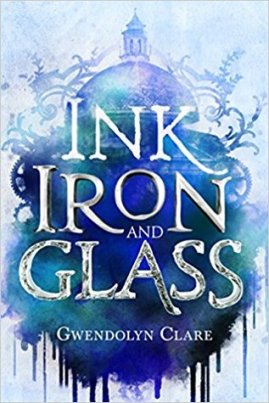 Ink, Iron, and Glass takes place in an alternate version of the Italian city-states in the mid-late 1800’s. BUT. It also partly takes place in a world called Veldana, a world that is completely made up, written into being by someone known as a scriptologist – a person that can literally write things into reality. Scriptologists, along with mechanists and alchemists, make up a group of people known as pazzerellones – extremely gifted mad scientist types that have an affinity for inventing and crazy experiments, sometimes to their own detriment.

Our main protagonist, Elsa, a young girl on the brink of adult-hood, has grown up with her mother Jumi, a scriptologist, in the world of Veldana. When Jumi suddenly goes missing, the apparent victim of an abduction, Elsa travels to Earth to try and track down the kidnappers and find her mother. When she finds her mother’s friend, de Vries, to ask for assistance he takes her to a home for orphaned pazzerellones where she meets other young people like herself and starts to make friends as they help her in getting to the bottom of her mother’s disappearance.

I’ll be honest and say this book is exactly my cup of tea. It’s got an interesting concept, a headstrong protagonist, and some fun banter between the characters. Also a bit of romance. Let’s just say it ticks a lot of boxes for me.

The setting and world-building in this is intriguing and one of things I loved most about this book. I liked that it was set in historical Italy–that felt refreshing. I also love the idea of these mad scientist types with specialized abilities. Being able to create portals to other worlds? Awesome. Being able to create entire other worlds? Even more awesome. Although, the thought of living in a world that is essentially stored in book on Earth gave me a bit of an existential crisis. (What if the book ceases to exist and your entire world winks out with it? What if our universe is just a world sitting on someone’s bookshelf and one day there’s a fire and it destroys our entire existence? Oh no!!) I also loved that all of the steampunk elements were not just aesthetics, but were essential to the world and plot. Yes there were some historical liberties taken and sometimes the characters felt a bit anachronistic, but honestly that’s not something that bothered me at all here.

I did like the characters, but oddly enough the one I feel like I connected most with was Elsa’s friend Porzia. I liked Porzia! She could have easily turned out to be the cliched jealous girl and I’m so glad she didn’t turn out that way. Out of the four friends, her and Faraz were the most consistent. The most developed characters were Leo and Elsa, but they weren’t all that consistent, I felt. Elsa went from not wanting to trust others to trusting the others a little too quickly in my opinion, but I still really loved every other aspect of her character. Leo gave me a bit of whiplash at times. I loved the brazen, swashbuckling parts of Leo–such a charmer. I also really like hurt and brooding Leo. But I sometimes felt like there was a bit of a disconnect between these two aspects of his character. Oh! And also there’s a cute little tentacle monster that is just the best thing ever (add that to things I thought I’d never write down…).

The plot did feel a tad manufactured at some points, as if the author was forcing the characters into furthering the plot rather than letting the characters take the wheel and drive the bus. That made it feel a bit clunky sometimes. A couple of examples without spoiling too much – there is a case of ‘insta-love’ that didn’t feel at all organic, and Leo’s choice at the end just fell flat for me. It’s like ‘well, this has to happen so that x, y, and z can happen’ and I get it, but it didn’t have the emotional impact I would have liked because I just didn’t feel that level of emotion had been built up between the two characters after a few days together, despite a few nice moments between them. But overall the plot moved along a good pace and had a nice ‘adventure-y’ feel to it. It felt very Indiana Jones-esque sometimes–the train sequence as well as the labyrinth puzzle–which was great fun. (I really, really, really loved the train sequence.)

Overall, I felt like this was a good debut novel and I’m looking forward to the sequel and to seeing more from this author in the future. I rated this 4/5 stars.