Let me preface this by noting that this is my own personal list of favorites. I’m not trying to say these are the best movies out there, just that they’re the ones I happen to enjoy the most. Everyone has different tastes and what one person finds interesting and entertaining, another person might think is garbage. (Some movies might be all garbage though…Dragon Wars: D-War, I’m looking at you.)

Also, this list is in no particular order (cuz I haz commitment issues?).  Links take you to IMDB pages. Descriptions are as spoiler free as possible.

1. The City of Lost Children

City of Lost Children (aka La Cité des Enfants Perdus) is a French film directed by Caro and Jeunet released in 1995. If you like the steampunk genre, this might be for you.

It’s about Krank, an odd man living in a laboratory, that begins kidnapping the city’s children so he can steal their dreams. Meanwhile, One (played superbly by Ron Perlman) is on the hunt for his little brother (kidnapped by Krank) so he teams up with a street-wise young girl named Miette in order to find and rescue him, along with the rest of the city’s missing children.

The look and feel of the film is highly stylized and the attention paid to every last detail is amazing; it somehow makes the grotesque feel beautiful. It effectively transports you into an alternate version of reality. Everything about this movie is weird and wonderful, from the story of Krank, to the odd friendship between One and Miette. It keeps you watching, wondering what’s going to happen next, even through all of the madness.

This is one of my favorite movies so I tend to overlook the fact that it stars Tom Cruise, mainly because it also stars Tim Curry who is freaking AWESOME. How much do I love this film? I named my cats Jack and Lili after the main characters, and when I recently got a new cat I considered naming him Darkness after the Big Bad (ended up going with Loki but that’s a whole other story).

Legend is a classic fantasy film featuring goblins, fairies, unicorns, magic, and a battle between good and evil (light versus darkness, literally) for the fate of the world (or just some forest village, maybe). The characters are one dimensional, and the story is fairly straight forward. Still, I enjoy it because of that. Most fairytale characters are painted in broad strokes because it’s the moral that’s more important than who the characters are, anyway.

Like any movie, it went through several rewrites and different cuts, however Legend is infamous for having two (mainly, but yeah, there are actually more) vastly different versions of this film; the U.S. theatrical version with the score from Tangerine Dream (very Eighties), and the European theatrical version (later to become a director’s cut version with added footage) which featured the original score by Jerry Goldsmith (a more classic type of movie score).  I’ve never seen the director’s cut, just the original U.S. version.

Spirited Away (aka Sen to Chihiro no Kamikakushi) is a Japanese animated film directed by Hayao Miyazaki released in 2001. When I first saw this movie (the first one of Miyazaki’s films I was able to see on the big screen) I remember sitting there just going along with the crazy ride and being blown away by the animation (wouldn’t expect anything less from Miyazaki).

It’s the story of Chihiro, an unhappy little girl, that somehow enters and becomes trapped in a realm inhabited by spirits after her family moves to a new home. In this spirit world her parents become transformed into pigs, so Chihiro works in order to free them, and to find the way back home. During her time there she befriends several spirits including a young boy named Haku.

It’s an extraordinary adventure filled with all sorts of odd looking characters. It may seem weird the first time you watch it (especially if you’ve never seen a Miyazaki film before), but after watching it a few times it all begins to seem normal. A really great story with a lot of heart and awesome animation.

Yes, I realize that this may be considered more horror than fantasy, but last time I checked, vampires weren’t real. (Nooooooo!) Ahem.

Let the Right One In (aka Låt den rätte komma in) is a Swedish vampire movie released in 2008 directed by Tomas Alfredson. Hollywood, never failing to capitalize on something’s success, remade it (Let Me In) in 2010. Personally, I think a perfect film should not have to be remade, but I’ll give the Hollywood version some props; it wasn’t complete crap.

The story is about Oskar, a boy that feels alone and is often bullied, befriending the new kid that moves into his apartment complex (who isn’t really a child, but a vampire). On one hand it’s kind of a love story. But on the other hand it’s the story of a creature seeking a means of survival.

The movie is dark and yet, despite the supernatural elements, feels grounded in reality. Because it feels so realistic, rather than fantastic, it makes the fantasy elements all the more surprising and creepy when they do appear. Some of the special effects are subtle, especially in the beginning, and yet they are more effective that way because of the build up to the ending.

Being a vampire fan I’ve seen A LOT of vampire movies over the years and I have to say, this is the best one I’ve ever seen. The end blew me away; not only because of the amazing graphic violence, but also for the realization of what the future has in store for the strange couple. 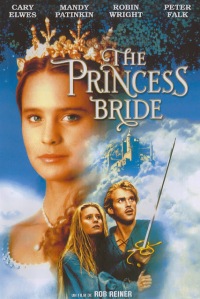 The Princess Bride is based on a book by the same name by William Goldman. (The book is amazing, even more hilarious than the movie and if you’ve never read it, I really don’t know what you’re waiting for.)

It’s primarily a comedy featuring a variety of characters that are often single-minded and more than a little absurd; but that sort of makes you love them all the more. The main story is about Buttercup and Westley, two young lovers that were separated before they could marry. Buttercup, believing Westley to be dead, has agreed to marry Prince Humperdinck, the heir to the kingdom (who is also kind of a dick). Westley returns with the intent to stop the wedding and once again be with Buttercup.

The side characters are almost more interesting because their stories are so engaging. This is especially true of the Spanish swordsman who is seeking out revenge and has probably the most quoted lines of the film, “Hello. My name is Inigo Montoya. You killed my father. Prepare to die.”

This is a light hearted and fun movie, quotable, classic.

Honorable Mentions (because really, who can narrow it down to just five films???):

Willow – Ugh. I have so many feelings for this movie. All of them good and filled with love.

The Adventures of Baron Munchausen – And pretty much anything directed by Terry Gilliam.

The Lord of the Rings (all of them) – Because, duh.